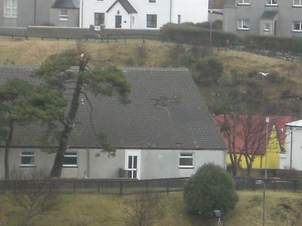 Even more Hall work
2015
Well it's 11 months since the last post, and you'd be forgiven for thinking nothing had been happening.
It's more a case of forgetting to take the camera.
After upgrading the hall decoration last year, we spent some time and money on the lobby. The OHMEET team once again did a great job in redecorating. The flooring was then replaced to make the lobby look much brighter than before.
In addition to this, we had the hole in the roof to deal with. We operated for a good few weeks with water pouring through into buckets. Luckily we have very patient customers. The picture shows where the top third of the tree bounced off the roof into the garden. Lewis Builders fixed the problem eventually - but obviously we took second place behind people's homes that were damaged in the storm.
So next on the list are the toilets. Have  a look at the Chairman's Report in the DOCUMENTS section for what we plan to do next.

This month sees the new Centre Manager Ann Ferguson, taking up the reigns. Kate, our retiring Manager has been in post for a number of years and is now stepping down to concentrate on her Volunteer Centre role. Ann is now getting to grips with the administration including the website and the facebook page. This month is a hectic one despite it being the holiday season. We have two weddings in consecutive weeks, then we're back up venue for the third. A baptism by fire for Ann. 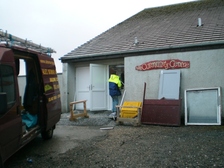 Bring on the new windows
JAN 2014
Work is now underway to replace windows and doors at the CC. Nessglaze delivered a double-glazed replacement for all the old single-glazed windows and doors. First up was the new front entrance (with new keys), then those drafty windows in the hall. The loft has been insulated and with the cavity wall insulation that was fitted before Christmas, the hall should hold it's heat much better.

Things are a changing
DEC 2013
The Army Cadets now have a new building of their own. A new portakabin which includes an office and classroom has been shoe-horned into the space on the front of the building, behind First Fruits.
In addition to this, the main building has had cavity-wall insulation fitted. With the wintery weather here, we should feel the benefit very quickly.

Refurbishment underway
NOV 2013
HMIA has been awarded £16,000 of funding from The Outer Hebrides Community Energy Fund managed by Community Energy Scotland. Alex Murray Construction will be working in the hall during December and January to upgrade windows and doors and insulate the loft. Long Island SBS will be installing cavity wall insulation as well.

The hall looks as though it’s going to be a hive of activity during this period. Please bear with us while the work is underway. We will try to minimise any disruption.

OHCEF Application for Refurbishment
OCT 2013
At the end of October, we submitted an application to the Outer Hebrides Community Energy Fund. The application covers the replacement of all the old timber or steel windows with new uPVC units. We'll hopefully get a new front door and fire exit doors too. In addition to windows and doors, we hope to thoroughly insulate the building. An application for loft and cavity-wall insulation is included.
This application marks the start of a concerted effort to upgrade facilities and make them more comfortable for hall users.

Community Survey
SEP 2013
The Community Survey for the Tarbert Community Centre has now closed. We have received 92 responses from the mailshot to each North Harris household. The HMIA Directors are grateful to all those that took the time to fill out the form and let us know what we can do to make the community centre more attractive and busier. Once we have analysed the results, we will publish the findings here.